Whether you’re looking for a new party recipe or a side dish to brighten up any protein, Chimichurri Smashed Potatoes are up to the task.

Have you heard about smashed potatoes?

They’re basically the best of both mashed and roasted potato worlds. Two delicious preparations all rolled into one.

I love this recipe when baby potatoes are in season during early spring. Spuds add a certain level of heartiness to vegetarian stews and other main dishes, but my favorite way to eat them is all on their own.

To be honest, it took me a little bit to give the smashed-potato technique a try. Mostly because of the time.

You’ll need a solid hour to cook these baby yellow potatoes to crispy, smashed perfection, but it’s worth it. Most of the minutes are hands-off, so the actual labor involved is almost nothing. They’re actually pretty weeknight friendly!

Here’s what you’ll need to do:

The first step is boiling the potatoes until they’re soft enough to easily pierce with a fork (and I do mean easily). Softer potatoes are easier to smash, so it’s better to err on the side of overcooking them versus trying to pluck them out of the pot too soon.

The potatoes will be really hot at first, so allow them to cool for a few minutes after they’re drained. Then spread them on a baking sheet and get to smashing.

Use a fork or a potato masher to press into the center of each potato until it begins to break open. The trick is to remove the fork just before it hits the bottom portion of the potato so everything still holds together. (It’s no big deal if some of the pieces fall apart during this process!)

Once the potatoes are smashed, I like to brush them with grapeseed oil and sprinkle with a little salt and pepper before they go into the oven.

The oil helps the potatoes get nice and crispy, and this is obviously what we’re after.

Don’t get me wrong. These smashed potatoes are delicious all on their own, but their flavor reaches a whole new peak with the addition of homemade chimichurri.

Fresh herbs make anything feel more springy. There’s just something about all that green.

Some people make chimichurri in the food processor, but I like to go au naturel and mix by hand. A knife and a whisk (or fork) are all you need to make a zippy and herbaceous chimichurri sauce out of fresh herbs, garlic, crushed red pepper, red wine vinegar, and olive oil.

I also took the liberty of adding some hemp hearts for a boost of texture and essential omega fats. It may not be authentic to the chimichurri recipes from Argentina and Uruguay, but I had to give it my own little spin.

Serve these Chimichurri Smashed Potatoes as a party app or on the side with your favorite protein. Either way, they're going to to make your day. 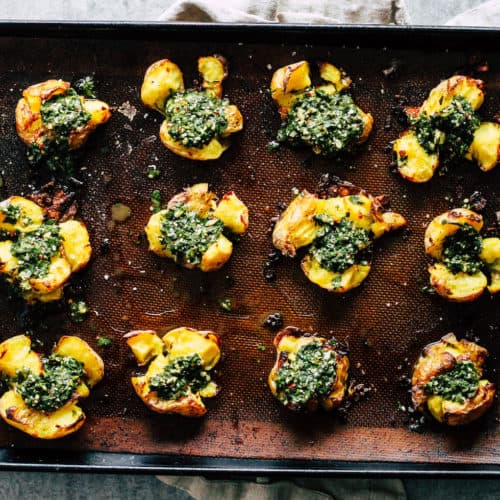 If you prefer smooth and creamy chimichurri sauce, pulse in a food processor before spooning on top of the potatoes.   Use this chimichurri sauce on tacos, grain bowls, or any roasted vegetable.
Tried this recipe? Tag me on Instagram!Mention @GratefulGrazer or tag #gratefulgrazer.

Do you like this recipe for Chimichurri Smashed Potatoes?