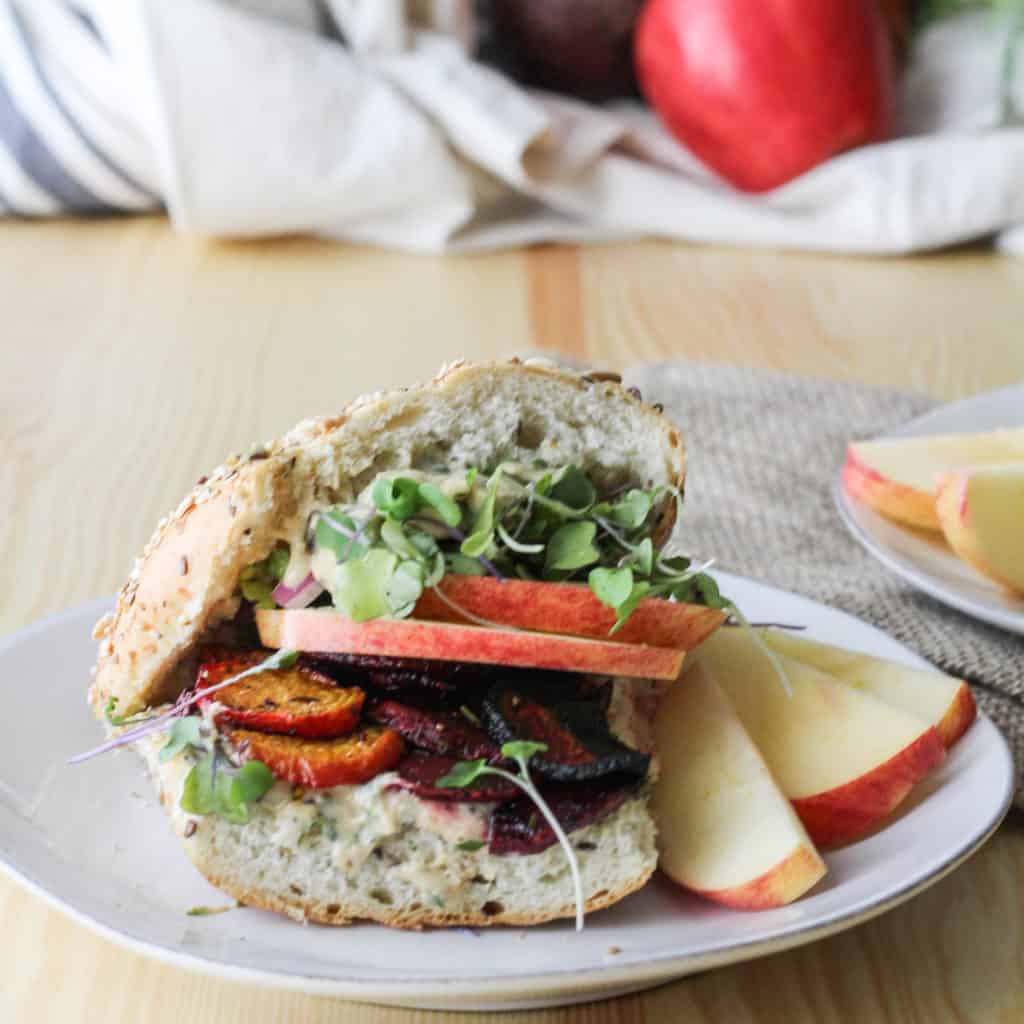 I received free samples of Sabra Spreads mentioned in this post. By posting this recipe I am entering a recipe contest sponsored by Sabra and am eligible to win prizes associated with the contest. (UPDATE: these sandwiches took grand prize! Enjoy!)

Boxes piled high to the ceiling.  Bubble wrap all over the place.  An apartment that generally looks as if a hurricane has blown through it.  Ah, moving.  It's all a little too familiar but this time does feel a little bit different.  We're not moving into another one bedroom apartment, we're homeowners. (!)

And as long as I have any say in this matter, I am staying put for awhile now.  (Three cheers for graduating from the move-every-year-since-starting-college phase of life.) 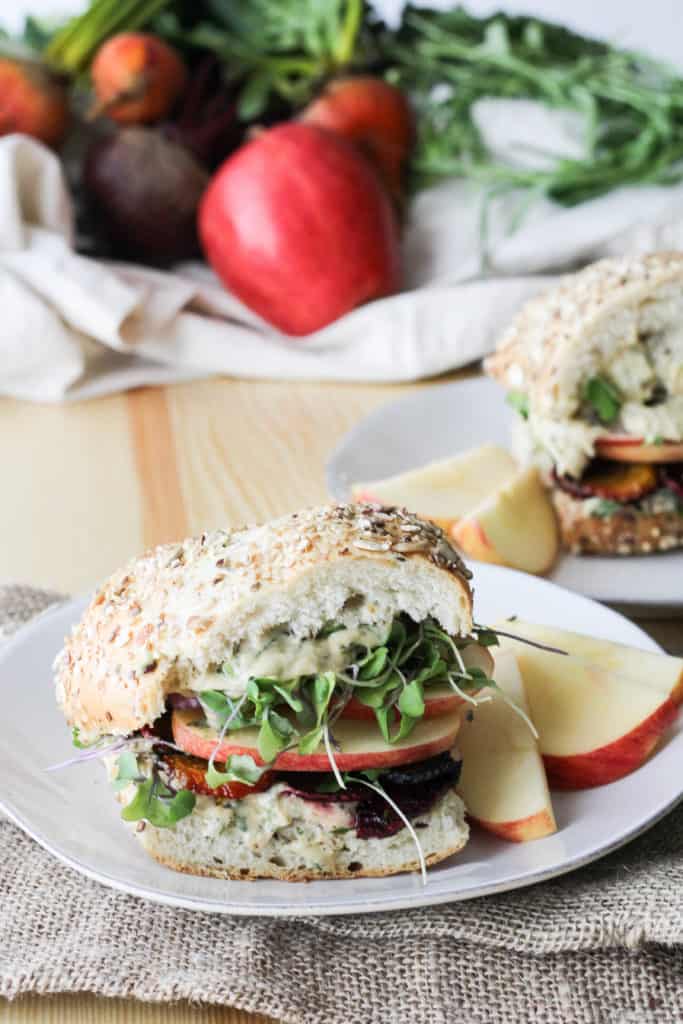 My kitchen is downright chaotic at the moment, so I'm doing my best to come up with simple and healthy meals and snacks that can be made ahead of time and require minimal kitchen equipment.  Finding out about Sabra's new line of spreads could not have come at a more opportune time.

What could be more convenient and mover-friendly than beet sandwiches with chickpea spread? 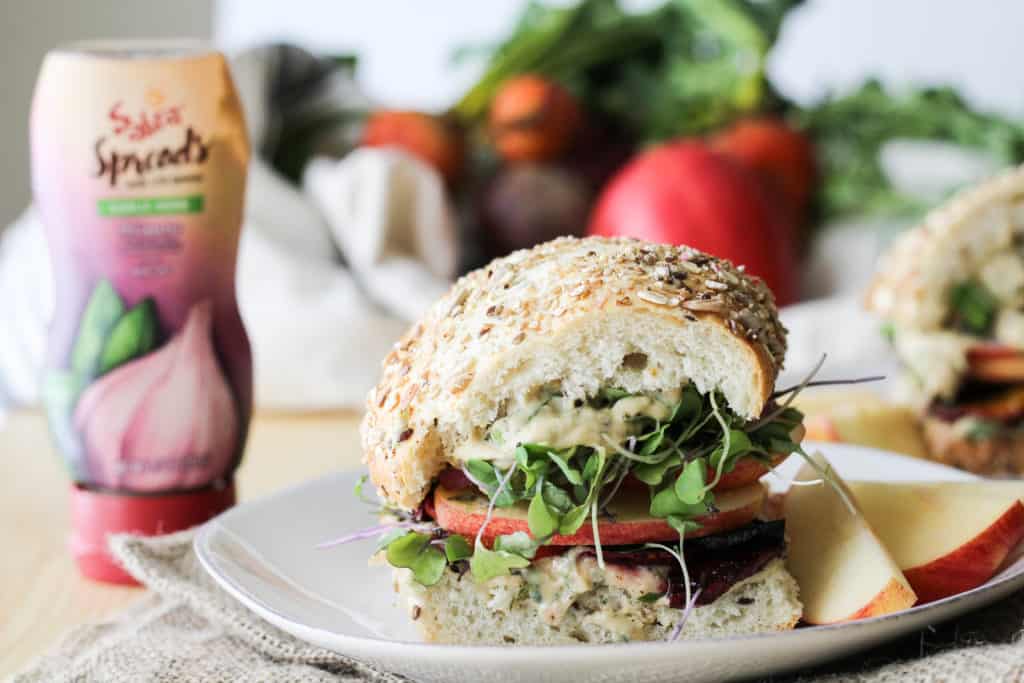 Delicious taste, whole food ingredients, and a convenient squeeze bottle to boot...seriously, I love this stuff. No need to dig out my spreader from those floor-to-ceiling boxes just yet.

I used the garlic herb flavor in this recipe but the honey mustard and sea salt and cracked pepper flavors are also delicious in their own right.

(Help, so many quick and easy sandwich combinations floating around this little brain of mine!) 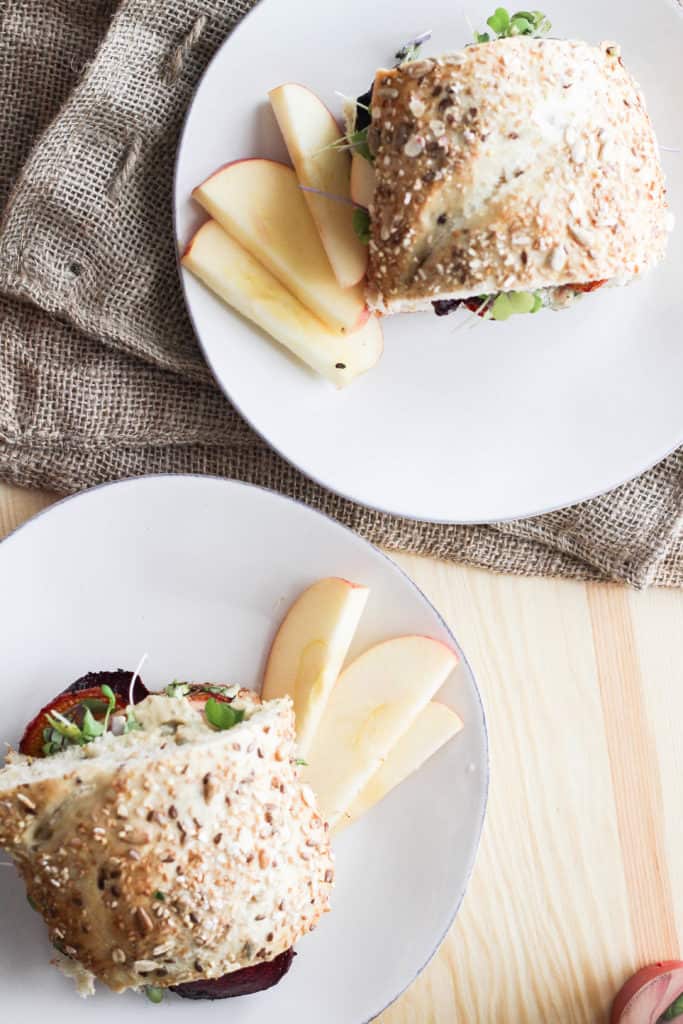 I can't tell you how many times I have discovered a new handy food product, tried it, actually loved the taste,  flipped it over to take a peak at the ingredients and nutrition facts, and done a little "wohhh-wohhh."  (<-- Sad trombone noise.)

Thankfully, that wasn't my experience this time around.  This spread is made with natural ingredients like chickpeas, tahini, garlic, basil, chives, and oregano.  It's also a great vegan - and higher protein - alternative to mayo. 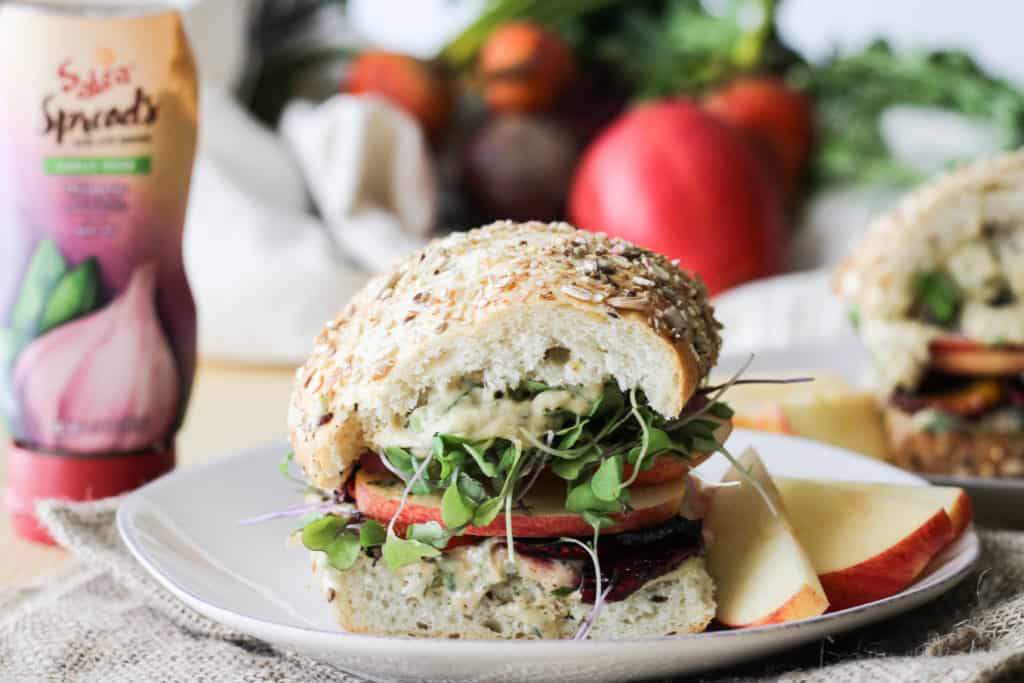 Sabra had me feeling all inspired by their garlic herb combination, so I followed their lead by adding a handful of fresh tarragon leaves to these beet sandwiches.  Have you tried fresh tarragon before?  I've been loving it recently in sandwich spreads, salad dressings, and sauces.  It adds a hint of licorice/fennel that adds a little zip to almost any recipe. 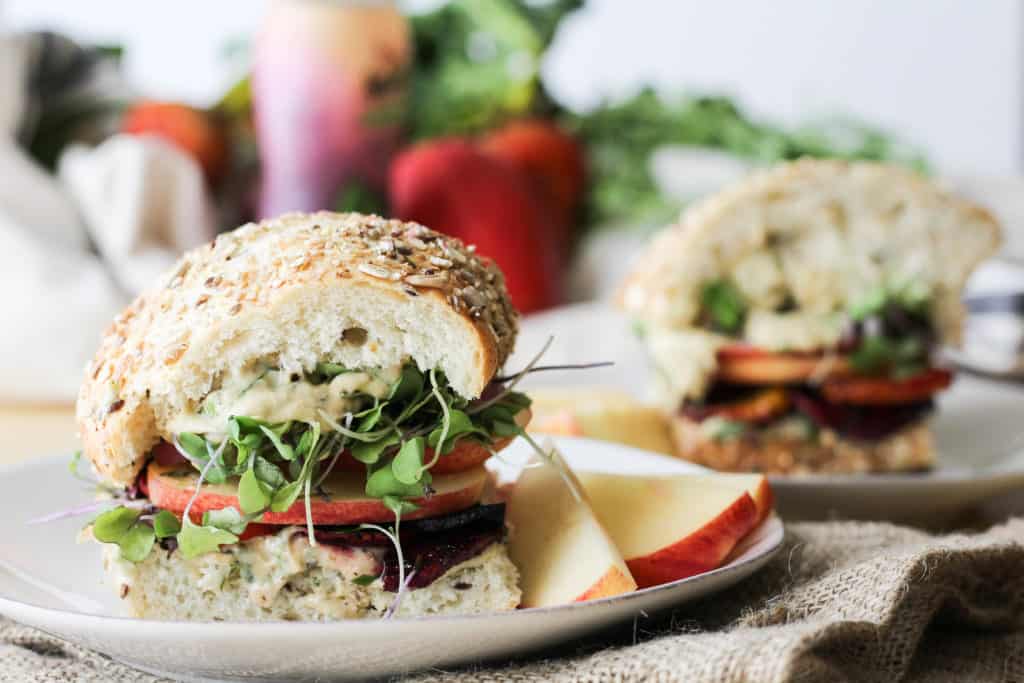 I tossed some chopped fresh tarragon leaves with thinly sliced beet rounds and toasted sesame oil before roasting them in the oven.  Mostly for convenience, I used the same mixing bowl to prepare the spread while the beets were in the oven.  Along with requiring fewer dishes, the remnants of the roasted beet mixture also added a delicious extra pop of sesame flavor to the spread.  It was a happy accident. 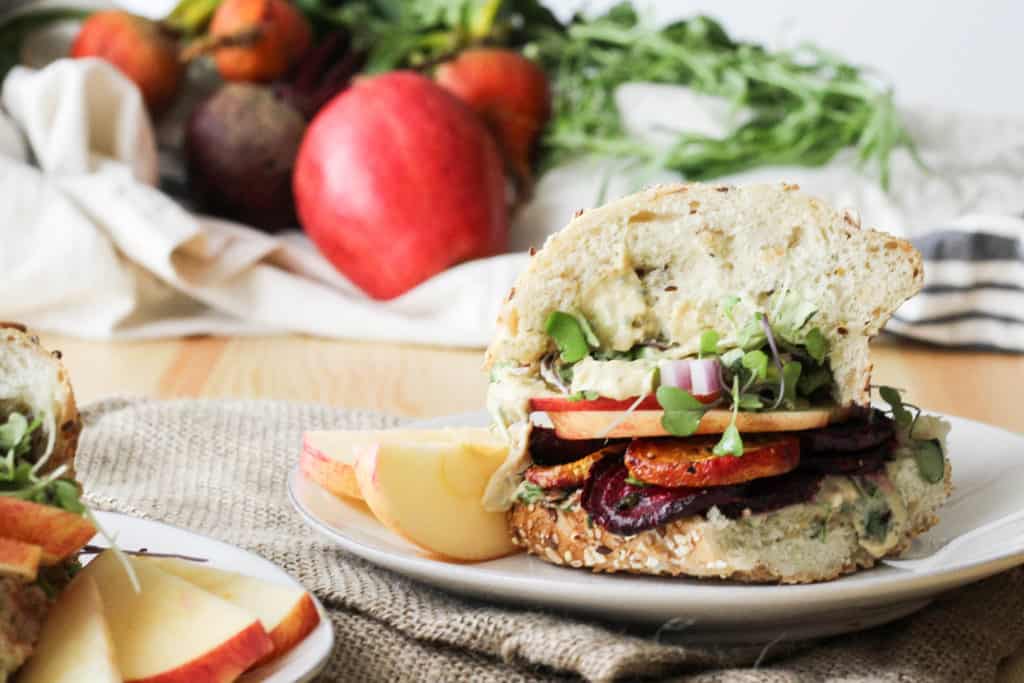 Along with stuffing tarragon roasted beets and garlic herb spread into my whole grain rolls, I also added a handful of micro greens, some sliced red onion, and a few fresh and juicy apple slices.  The apple was a last second addition that, in my opinion, took this sandwich to whole 'nother level.  (Just try it.)

I've never experienced the chaos of a move so deliciously. 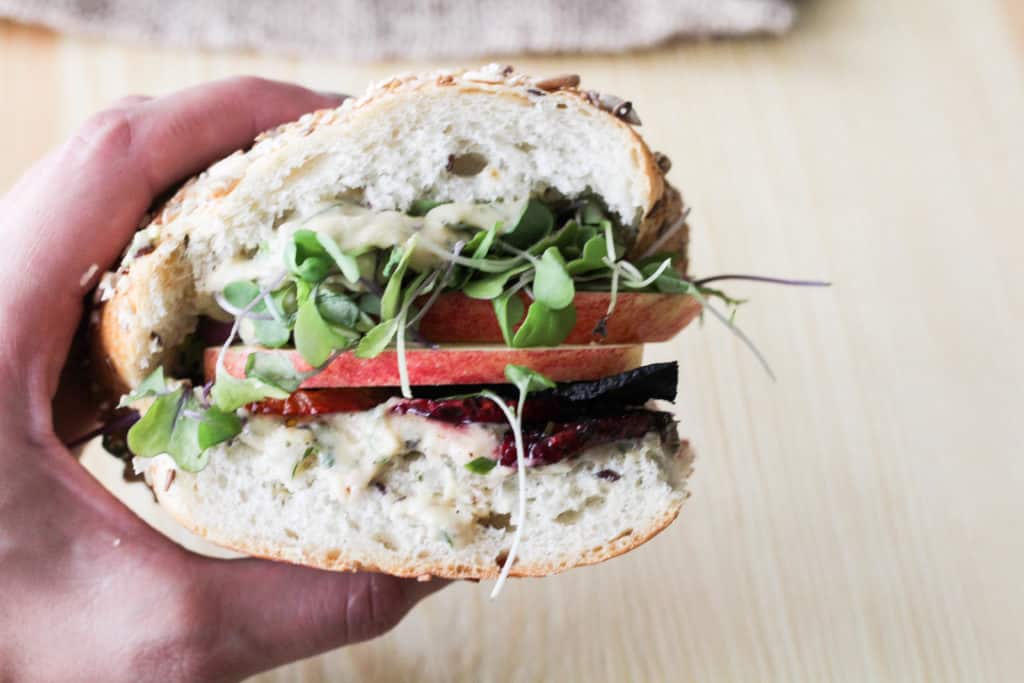 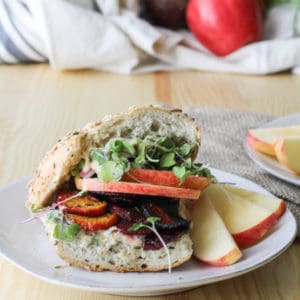 Have you tried Sabra's new line of sandwich spreads? 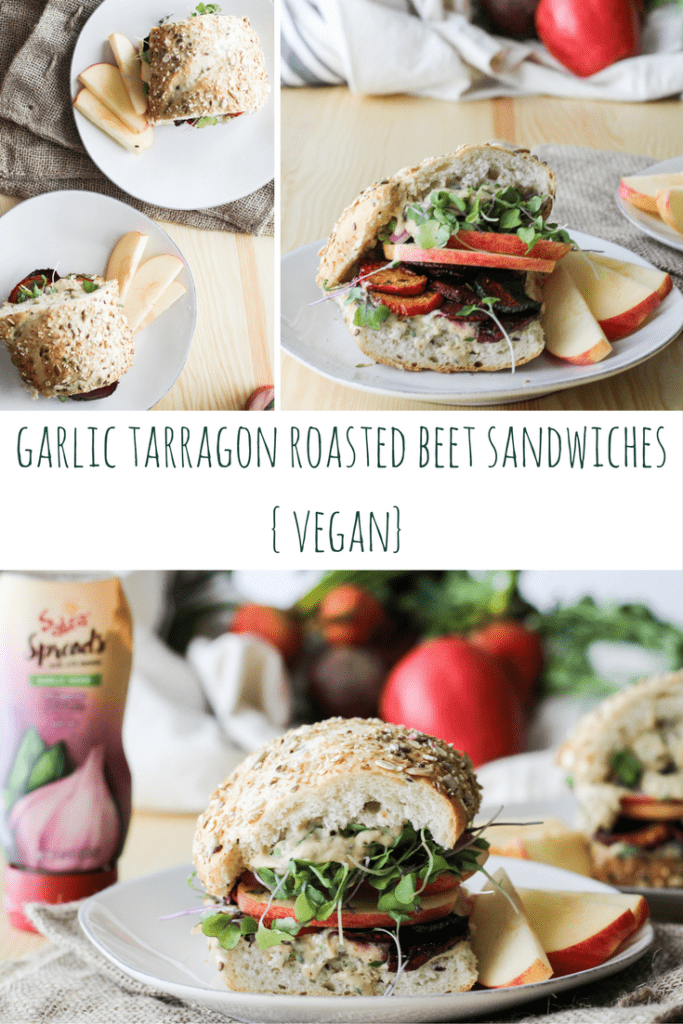