Cinnamon rolls have long been my favorite way to celebrate the weekend or any lazy morning when I don’t have to be anywhere right away. I started with the cinnamon rolls out of a tube but eventually worked my way up to homemade versions since they’re actually pretty easy to make with pantry ingredients.

Other than warm and gooey cinnamon rolls, I’ve also felt drawn to all of the fresh citrus that’s in season this time of year. Oranges, mandarins, grapefruit, lemons, and limes are abundant during winter, and they’re mouthwateringly juicy and delicious. So I figured I’d combine two of my favorite wintry things: oranges and cinnamon rolls.

Besides all of the citrus, my other strategy is using whole milk to bake my orange cinnamon rolls. The fat in whole milk helps tenderize and prevent baked goods from drying out. I used Horizon® Organic whole milk, which I love because it’s produced by Danone North America, a Certified B Corporation®.

How to Make Orange Cinnamon Rolls with Fresh Citrus Icing

How to Make Orange Cinnamon Rolls:

This orange-flavored cinnamon roll dough is made with a 50/50 blend of whole wheat and all-purpose flours. Using some whole grain flour gives these sweet rolls more fiber, which helps your body process the sugar more easily.

Next, add the orange flavor. Add grated orange peel and fresh orange juice to the bowl and use your hands to knead them into the dough for about one minute. Let the dough rest for about 10 minutes, and then roll it out on a flat surface, such as a countertop or large cutting board.

The filling for these Orange Cinnamon Rolls is a simple mix of sugar, cinnamon, ground cloves, and grated orange peel. First, brush the rolled out dough with melted butter.

Then, stir together the sugar, spices, and orange zest, and sprinkle them on top of the rolled out dough.

Once you add the filling, tightly roll up the dough to form a long cylinder. Slice the dough into 8 equal pieces and spread them on a greased 9-inch pie dish. Loosely cover and allow the dough to rise for about 90 minutes, or until the rolls have doubled in size.

Once the rolls double in size, pop them in a 350º Fahrenheit oven and bake for about 25 minutes, or until the tops turn golden.

How to Make Orange Icing:

The orange icing on top of these cinnamon rolls is technically optional, but I think it's absolutely the best part! It’s also easy enough to whisk together right as the cinnamon rolls are coming out of the oven, so it’s pretty much a no-brainer. Just stir together powdered sugar, room temperature cream cheese, orange juice, butter, and a pinch of salt.

What’s the Best Way to Store these Orange Cinnamon Rolls?

Because they’re topped with cream cheese icing, these Orange Cinnamon Rolls need to be kept in the refrigerator. Store in an airtight container and eat them within three days.

I think they still taste good cold, but you can also reheat them for about 20 seconds in the microwave if you prefer them warm. Either way, these Orange Cinnamon Rolls are every bit as dreamy as they sound. Who’s ready for the weekend? 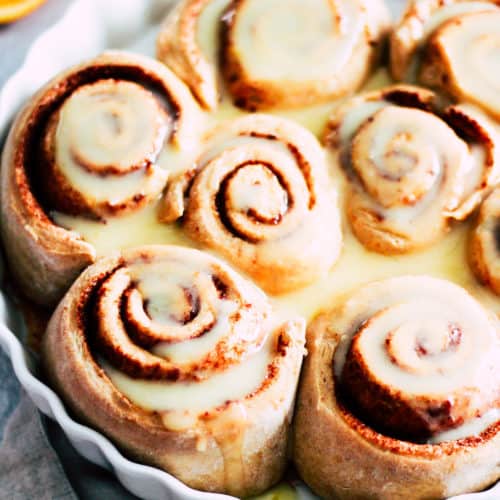 Icing is optional. Feel free to omit if you want to make this recipe easier and lower in sugar.
Tried this recipe? Tag me on Instagram!Mention @GratefulGrazer or tag #gratefulgrazer.

Did you try these Whole Wheat Cinnamon Rolls?

Rate and leave a comment below to let me know how it went. You can also tag me (@GratefulGrazer) on Instagram.