These vegan stuffed Poblano peppers are filled with black beans and corn, baked in the oven, and topped off with a tangy cilantro-lime avocado sauce.

What's your favorite easy dinner to cook lately? For me, it's stuffed poblano peppers with creamy avocado sauce.

These peppers are spicy and comforting.

Plus, you can use the same skillet to make the filling on the stovetop and bake the stuffed peppers in the oven. Convenient and easy cleanup. It doesn't get any better.

This recipe has everything I look for in a solid, always-on-repeat weeknight dinner.

Have I convinced you to try it yet?

The first step for making these stuffed poblanos is to sauté the filling, which is a mixture of red onion, corn, black beans, quinoa, tomato, spinach, and spices.

Once cooked, transfer to a bowl until you're ready to stuff the peppers.

There are a few different ways to cut the peppers, but I like to simply slice them in half lengthwise and remove the seeds before stuffing them with the filling.

Spread the poblano peppers in the same skillet used to sauté the filling. (Switch to a baking dish if you don't have an oven-safe skillet.)

Once stuffed, bake peppers in the oven for about a half-hour.

While the peppers are baking, make the cilantro-lime avocado sauce in your blender.

Combine avocados, lime, cilantro, jalapeño, and agave nectar in the blender container. Gradually add water while you blend on high for about two minutes, or as long as it takes for the sauce to become smooth and pourable.

I like to pop in the lime (peel/rind and all)—it's an easy way to add flavor and reduce at-home food waste.

If you don't have a blender, just use the juice of the lime and whisk it in a large bowl with the other ingredients. (You'll have to chop the cilantro and jalapeño more finely if you're making the sauce by hand, too.)

Once the peppers are cooked and the sauce is smooth, you're ready to eat.

Drizzle the avocado sauce over the stuffed poblanos and garnish with cilantro and lime wedges.

Can you make stuffed poblano peppers ahead of time?

The thing that makes this recipe so weeknight-friendly is that you can make the filling and stuff the peppers up to two days in advance.

Cover and store the pre-stuffed peppers in your refrigerator until you're ready to bake them like usual.

Make the avocado sauce right before serving to prevent it from turning brown and losing its vibrant green color.

Is this dish spicy? How can you make a milder version?

This dish has a good amount of spice from the Poblano peppers, themselves. You can also add a bit of cayenne to the filling and jalapeño to the sauce if you're looking for a little more.

To make a milder version, use bell peppers instead of Poblanos, and omit the cayenne and jalapeño.

Can you make other ingredient substitutions?

I'm a big fan of ingredient substitutions since they help you use up the food that's already in your fridge.

Feel free to swap in another dark leafy green for the spinach or use pinto beans instead of black. If you don't have quinoa, leftover cooked brown rice would make a good substitute.

Are canned and frozen foods okay?

Yes! You can always swap in canned beans (drain and rinse them first), canned tomatoes, frozen corn, or frozen spinach when you make this recipe. 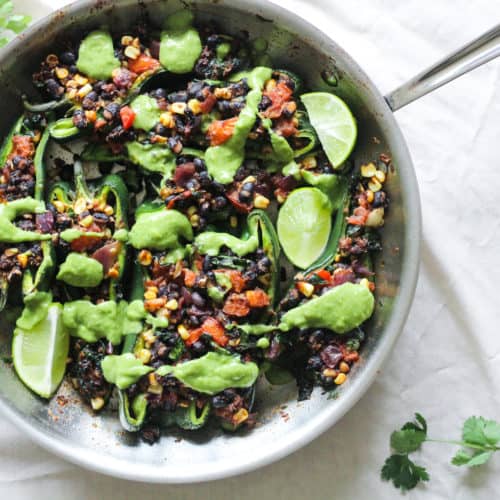 If you don’t have an oven-safe skillet, spread raw pepper halves in a glass or ceramic baking dish. Add the filling and bake as directed. Cover with aluminum foil if you don’t have a lid.   To prepare in advance, make the filling and stuff raw poblano peppers up to two days ahead. (Cover and store pre-stuffed peppers in the refrigerator.) Bake the stuffed peppers and prepare the avocado sauce right before serving for freshest results.   For a milder flavor, use bell peppers instead of poblano peppers. Omit the cayenne in the black bean mixture. Omit the jalapeño in the avocado sauce.
Tried this recipe? Tag me on Instagram!Mention @GratefulGrazer or tag #gratefulgrazer.

Did you try this recipe? I Want to Hear About It