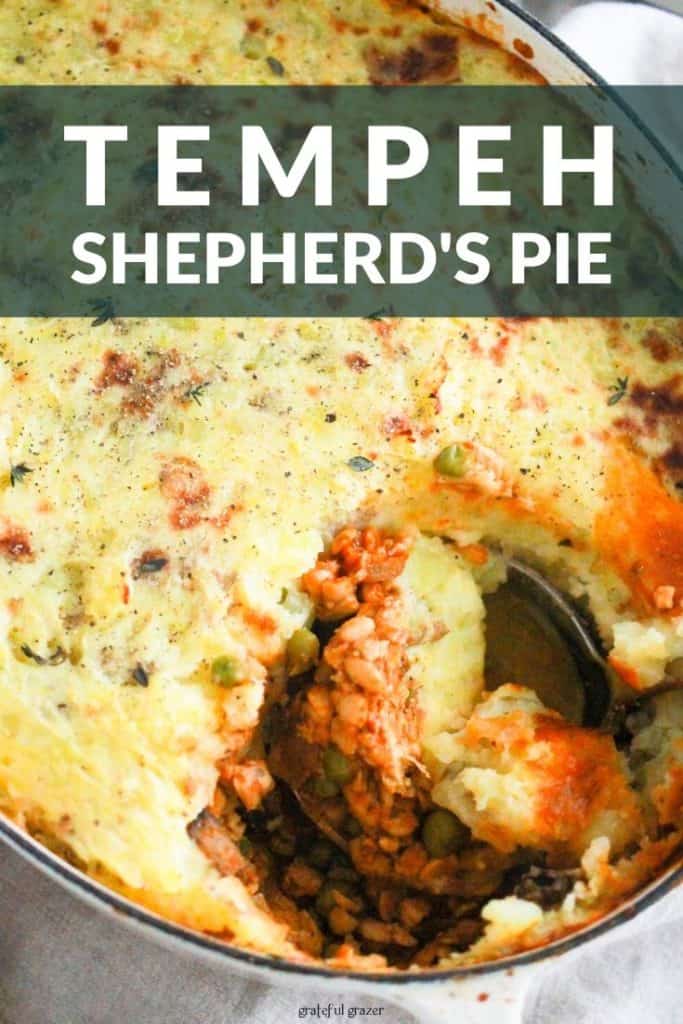 Make this Tempeh Shepherd's Pie on St. Patrick's Day or anytime you're in the mood for vegetarian comfort food.

I’ll never stop craving hearty, vegetarian comfort food dishes like this Tempeh Shepherd’s Pie, which is made with simple ingredients that are almost always stocked in my kitchen.

What is Shepherd’s Pie?

A shepherd's pie (also known as a cottage pie) is basically a savory meat pie.

All good shepherd’s pies start with mashed potatoes. I like to add plenty of garlic for flavor. The mashed potatoes are layered over a meaty “filling” usually made of ground beef. In this vegetarian version, I’m using crumbled tempeh instead.

How to Make Tempeh Shepherd's Pie

I like to use gold potatoes for the topping, but any type works. Quarter the potatoes and boil them for about 20 minutes, or until you can easily pierce them with a fork.

Turn off the heat, drain the liquid, and return the cooked potatoes to the pot.

Use a potato masher to mash the potatoes. (I like to keep some chunks for added texture.) Stir in a few cloves of garlic and a half-cup each of whole milk and plain Greek yogurt. This is where you get all of the flavor and creamy texture.

While the potatoes are cooking, prepare the tempeh filling. I like to use a Dutch oven for this step since we’ll be finishing the tempeh shepherd’s pie in the oven. You can also use an oven-safe skillet with raised edges, such as one made of cast iron or stainless steel. (if you don’t have either, you can still make this recipe with a skillet and baking dish instead.)

Heat a little oil in your Dutch oven over medium heat. Sauté the veggies—onion, carrots, celery, and mushrooms. Stir in a cup of frozen peas, crumbled tempeh, vegetable broth, and tomato paste. Place a few sprigs of thyme, rosemary, and sage on top.

Increase the heat to high, bring to a boil, and then reduce the heat to low and cook for about 10 minutes, or until most of the liquid is absorbed.

Remove the herb sprigs and spoon the mashed potatoes on top of the tempeh filling. Transfer the pot to the oven and cook 30 minutes, or until the potatoes are golden brown. I like to broil during the final five minutes to get even more browning.

How can you make this Tempeh Shepherd’s Pie vegan and dairy-free?

This recipe is naturally vegetarian, but you can also make a couple of simple swaps to make it vegan and dairy-free. Instead of whole milk, use any type of plain, unsweetened plant milk. My favorite is oat, which you can make yourself. (Just omit the strawberries, sweetener, and vanilla from this recipe.)

Instead of Greek yogurt, use a dairy-free yogurt alternative, such as coconut, soy, oat, or almond-based varieties. Any type that’s plain and unsweetened will do the trick.

Can you substitute another ingredient if you don’t have tempeh?

Instead of tempeh, try this with cooked lentils or green split peas. Any type of bean works, too.

What if you don’t have a Dutch oven?

If you don’t have a Dutch oven, sauté the vegetables and cook the tempeh filling in a large skillet. Then, transfer the filling to a baking dish and spoon the potatoes on top. Bake until the potatoes are golden brown.

Can you make Tempeh Shepherd’s Pie ahead of time?

Store leftover shepherd’s pie in an airtight container and refrigerate for up to 1 week. 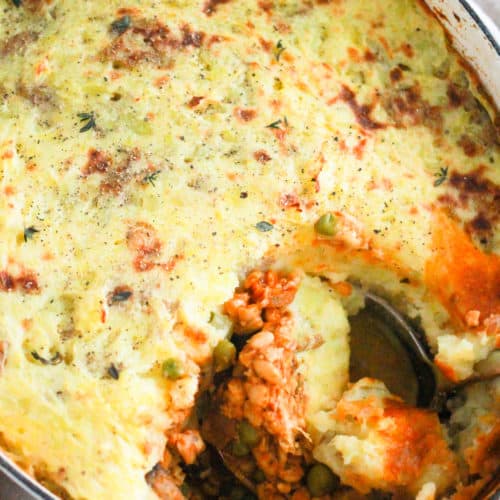 Vegan variation: Use plain unsweetened oat milk (or any type of dairy-free milk) instead of whole milk. Use a plain, unsweetened dairy-free yogurt alternative (such as coconut, soy, oat, or almond-based varieties) instead of Greek yogurt.   If you don’t have a Dutch oven or an oven-safe skillet, you can transfer the tempeh filling to a baking dish right before you add the potatoes and bake.   I prefer to leave the potato skins on, but you can also peel them before boiling if desired.   Recipe tested with 5% Greek yogurt.   Recipe adapted from Downshiftology.
Tried this recipe? Tag me on Instagram!Mention @GratefulGrazer or tag #gratefulgrazer.

Rate and leave a comment below or tag me (@GratefulGrazer) on Instagram. I'd love to hear how it went!