Potato Nachos are a welcome twist on taco night. A base of crispy fingerlings coated in Mexican spices and served up with all the necessary fixings.

When you eat tacos weekly, you eventually feel the urge to get a little bit creative. Maybe that’s what’s going on with these Fingerling Potato Nachos.

It could also be the time of year. Fingerling potatoes are in season during spring, and they’re hearty enough to provide comfort early in the season when it’s still rwgularly snowy and freezing cold out.

This is probably why I’ve had potato nachos on the mind in a major way recently.

Crispy, spicy, and decked out with all the most colorful toppings. Fingerling Potato Nachos won’t be ignored.

Why would you even want to?

How to Make Fingerling Potato Nachos

Parboiling cuts back on the cooking time once the fingerling potatoes are in the oven, so that’s the very first step here.

While the potatoes are boiling (and subsequently cooling), make your spicy Mexican sauce.

Just whisk together oil, vinegar, and a few Mexican-inspired spices. I like to use chili powder, cumin, garlic, and cayenne. To minimize dishes, I whisk the sauce in a large mixing bowl that’ll also fit the potatoes later on.

Next, slice the cooled fingerling potatoes in half lengthwise. Cut any extra large potatoes in half again (so they’re actually quartered) to make all the pieces similar in size. (This helps them cook more evenly.)

Toss sliced potatoes in the bowl with the sauce, give it all a good stir, spread the pieces cut-side down on a baking sheet, and roast.

After about 20 minutes, the bottoms of the fingerlings will get brown and crispy. At this point, remove the baking sheet from the oven, stir the potatoes with a spatula, and add the tomatoes, cheese, and sliced chile peppers.

Return all that to the oven and bake until the cheese starts to turn brown and the veggies are softened.

Serve with all your favorite fixings and you’ve got Fingerling Potato Nachos.

There are a few different ways you can shake up this recipe depending on how you like to eat your nachos (or how much time/energy you want to put into making them).

Cotija is probably my favorite Mexican cheese, but you could also use queso fresco, pepper jack, or Mexican-style shreds. Dairy-free cheese alternatives are also a good option if you want to make this recipe vegan.

Whatever you usually put on your tacos or nachos works here. You could even omit the cheese altogether if you want.

Do you like nachos with a melty cheese sauce?

I sometimes have the tendency to skip a recipe altogether when there are too many ingredients or components, so I wanted to keep this one nice and easy and completely weeknight friendly.

If you’re feeling motivated, feel free to add your own melty cheese sauce. I recommend this recipe by Sally’s Baking Addiction or vegan cashew cheese sauce by Oh She Glows.

Putting Your Own Spin on the Toppings

Just like the cheese, you can sub in any of your favorite fixings.

Add in whatever you usually like on tacos and other Mexican-inspired dishes.

I used cilantro, avocado, and hot sauce, but salsa, pickled vegetables, green onions, olives, and sour cream (or plain yogurt) are all fair game, too.

Want to turn this side dish into the main event? Add black beans or crumbled tempeh, which are both good sources of plant-based protein.

There are so many ways to make this recipe your own. It's also a good way to use up leftover odds and ends when you’re up for a little fridge foraging! 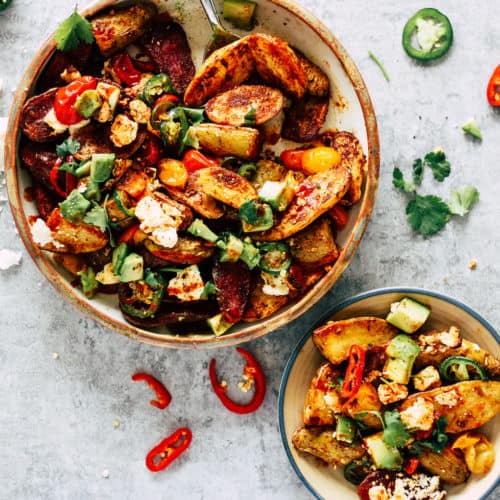