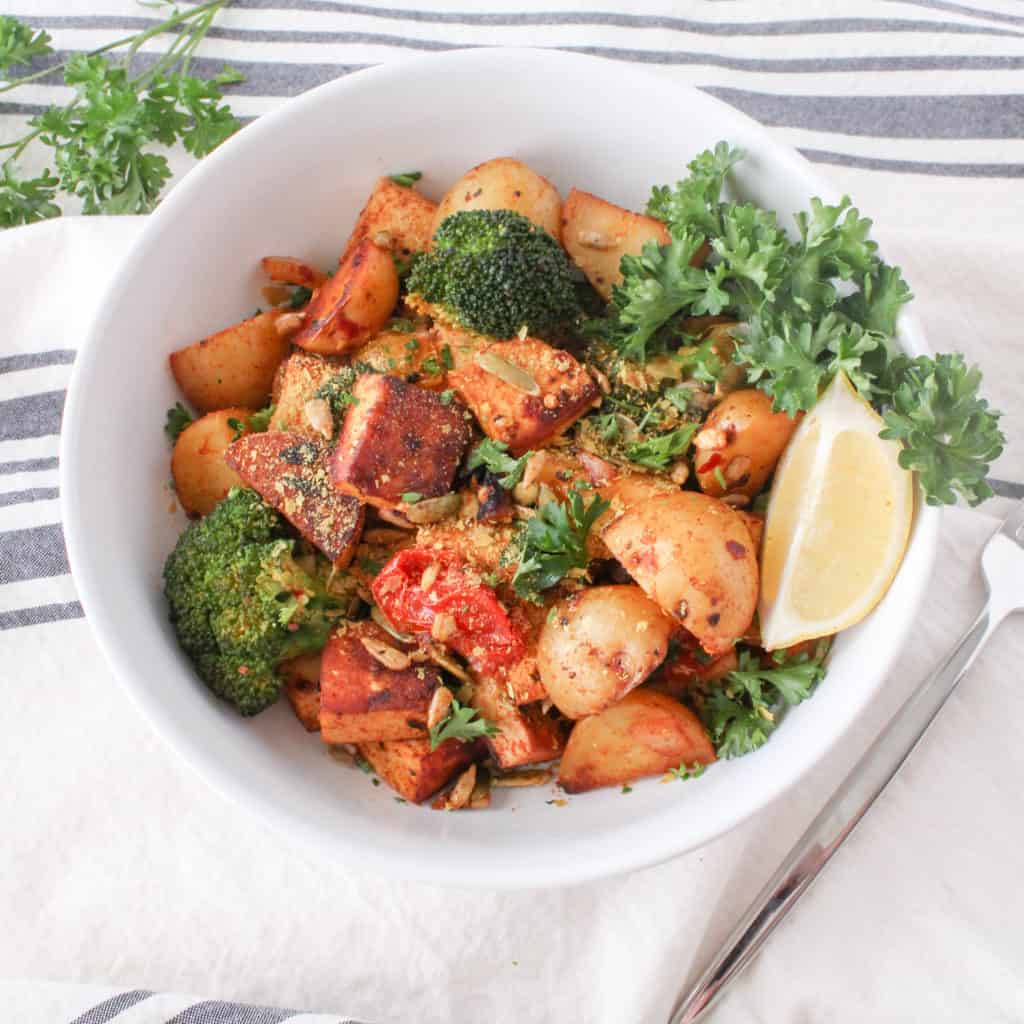 Austrian Potato Hash. Today's recipe is inspired by a favorite dish I had while honeymooning in Europe last year. It's comforting, hearty, and completely vegan.

Gros-what? Grøstl, or grøestl, or grstl, or groestel, (phew) is a potato hash dish that originated in Austria but I actually had the pleasure of trying it for the first time at the Ayinger tavern in Munich, Germany. I wrote about it here. Of course, I also posted a shot of the original on Insta before digging in:

It's funny looking back, because I was actually kind of concerned about finding good plant-based food in Germany, the land of sausages and smoked meats. I was so wrong! Munich was filled with so many delicious options but this grøstl was definitely my favorite. I promised myself right away that I would recreate this magical potato hash in my own kitchen as soon as I returned to the States. 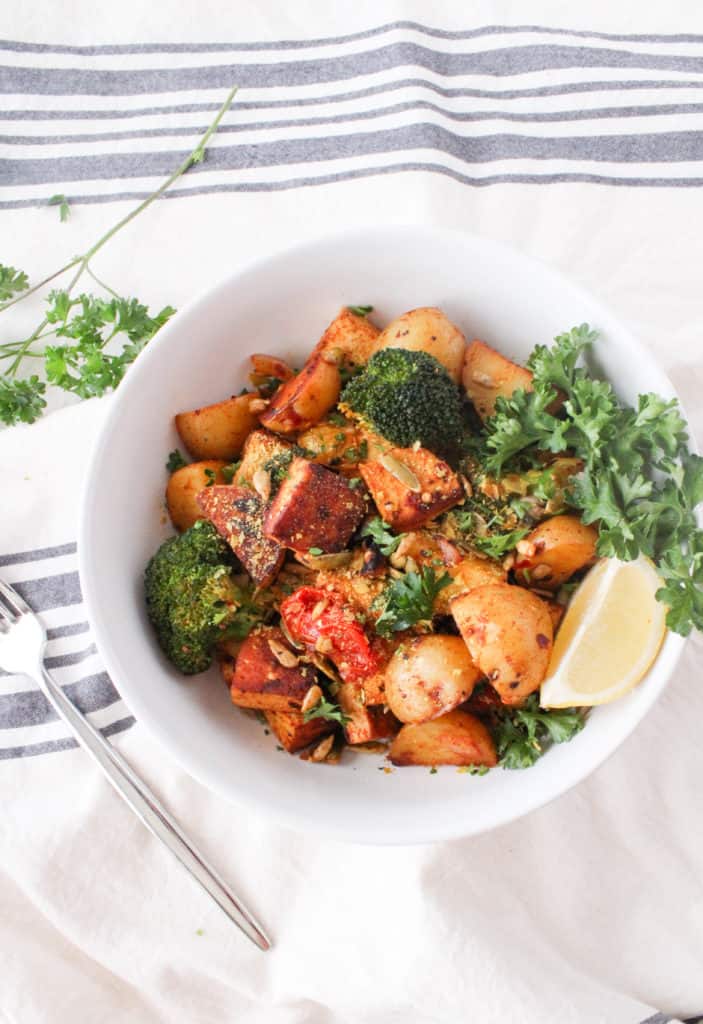 Well, life goes on. A whole year passed, and still no grøstl. (In part because this past year felt like a blur of, oh, about three weeks total.)

So when I learned that this month's Recipe Redux theme was to recreate a vacation-inspired recipe, my mind was made up immediately. This is it. It's time. Let's grøstl, people. 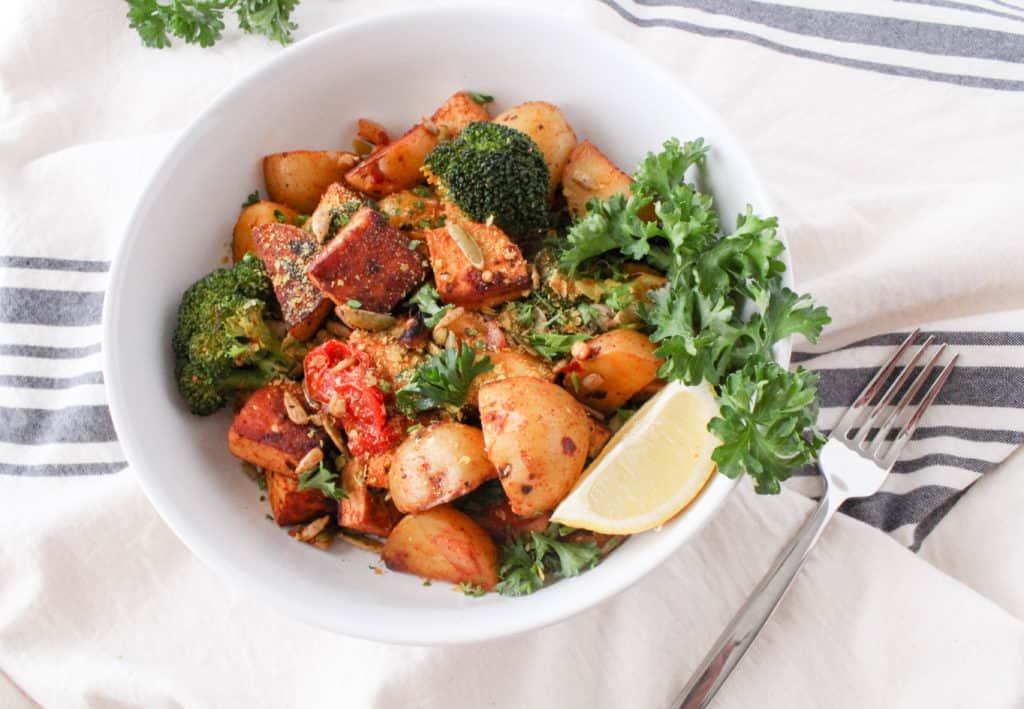 Like most German/Austrian dishes, grøstl typically starts with smoked meat but the folks at Ayinger had the greatest idea ever - they used smoked tofu. To get similar flavors in my version, I used a generous helping of smoked paprika (my secret weapon for making any vegan dish taste like it just came off the smoker).

There were a few more additions to Ayinger's vegan version of the traditional dish. They added cherry tomatoes, and fresh broccoli, and two types of seeds. All grøstl upgrades in my mind, so I brought them into my version too. 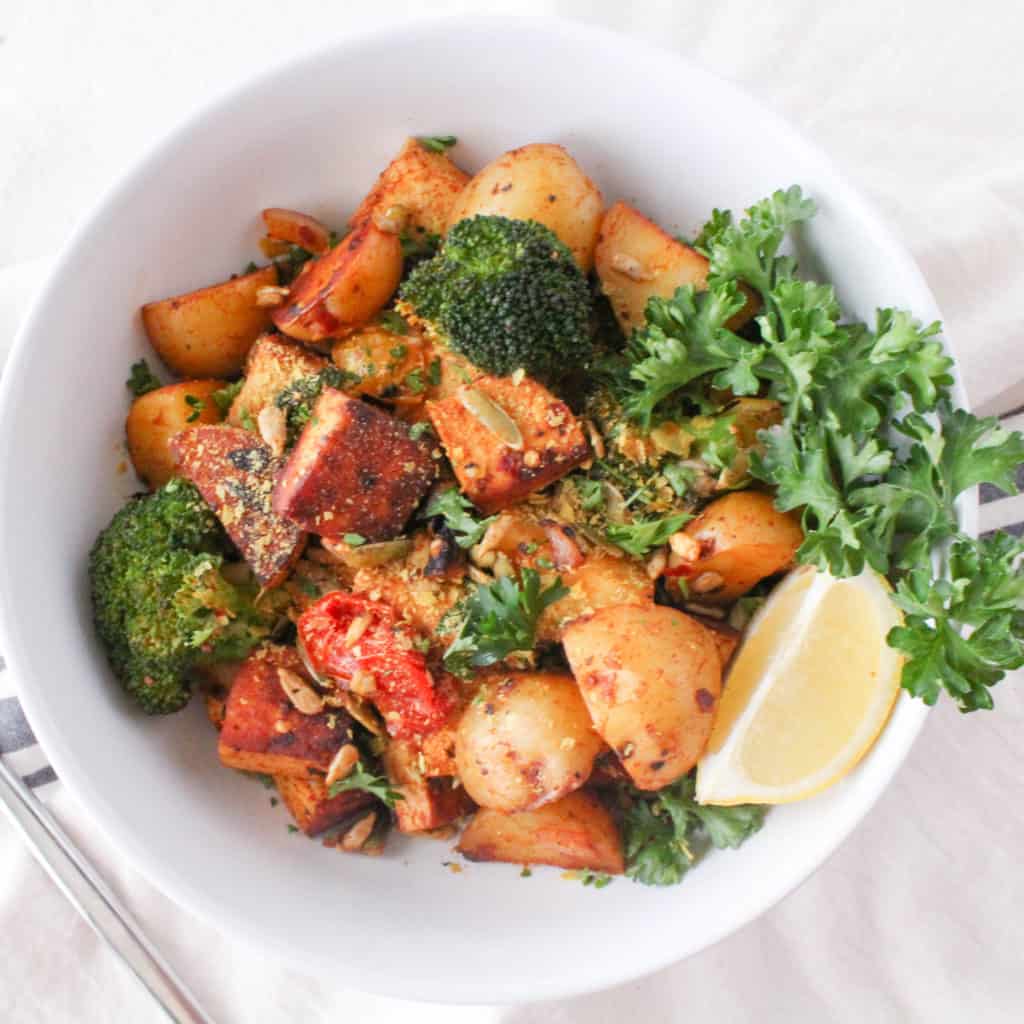 I know we typically think of hearty potato dishes as being perfect for fall and winter but trust me, there's nothing like a little summertime  comfort food action. This dish is hearty and filling - perfect for those days when you know a light summer salad just isn't going to cut it.

Don't worry, with fresh herbs and seasonal tomatoes, your summer-loving self will still feel satisfied. 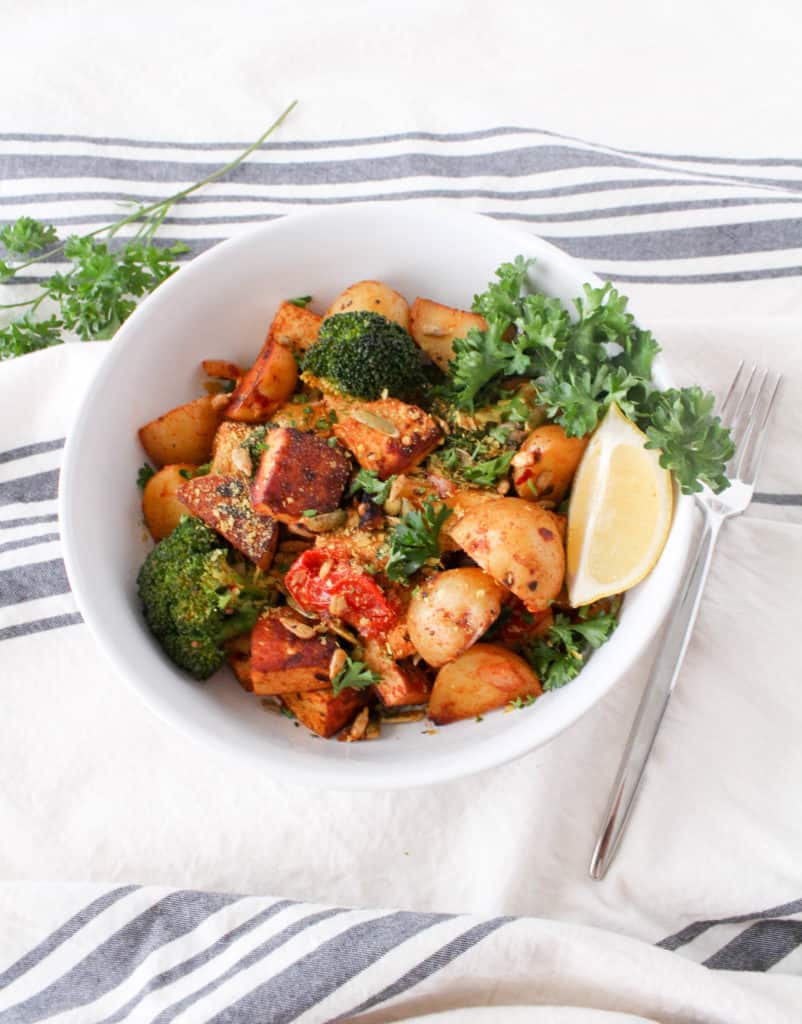 Besides being one of the most satisfying vegan dishes out there, I also love that this grøstl can be completely prepared in one large skillet or frypan. Fewer dishes means more time on the patio to soak in what's left of these late-summer nights. 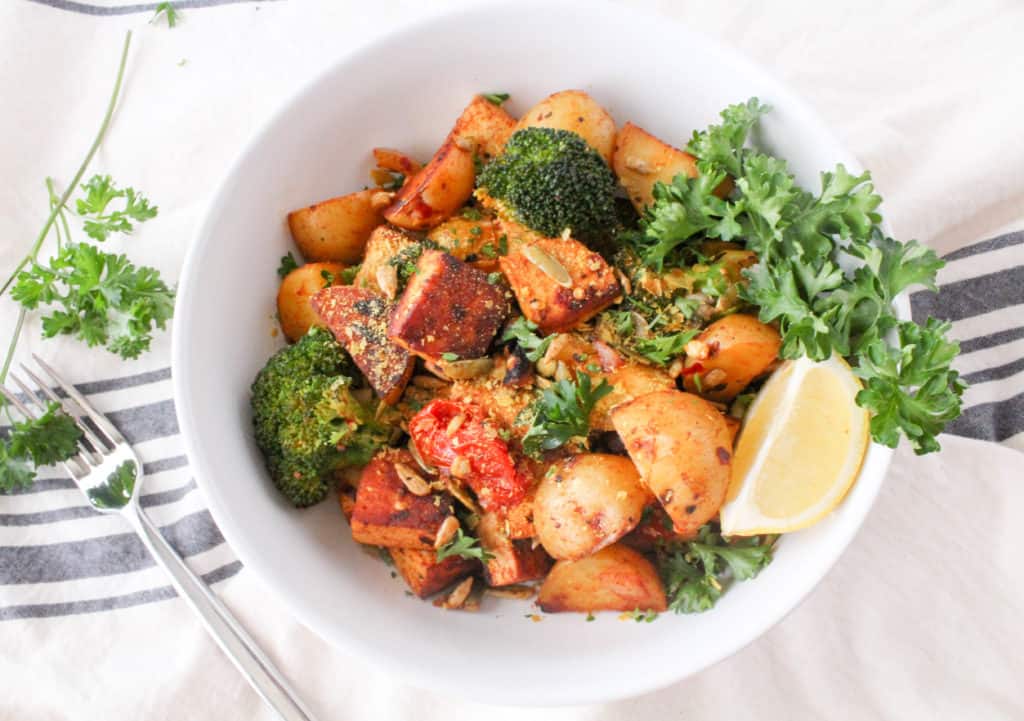 I like to eat this dish fresh out of the frypan but you can also prepare ahead of time and reheat as desired. Straight out of the fridge, with some dressing on top of a bed of salad greens, it also perfect for a quick and satisfying weekday lunch. 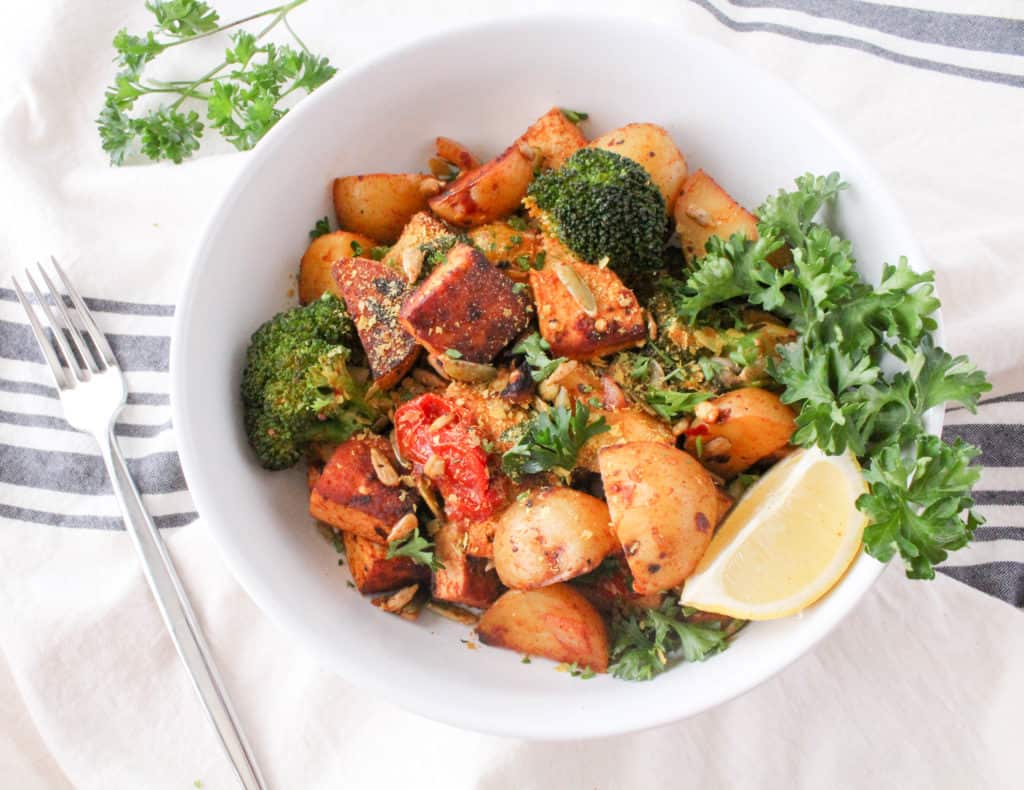 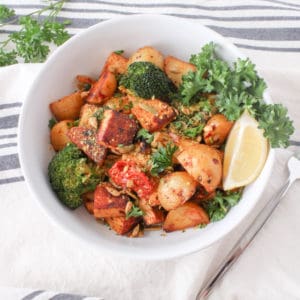 Tried this recipe? Tag me on Instagram!Mention @GratefulGrazer or tag #gratefulgrazer.