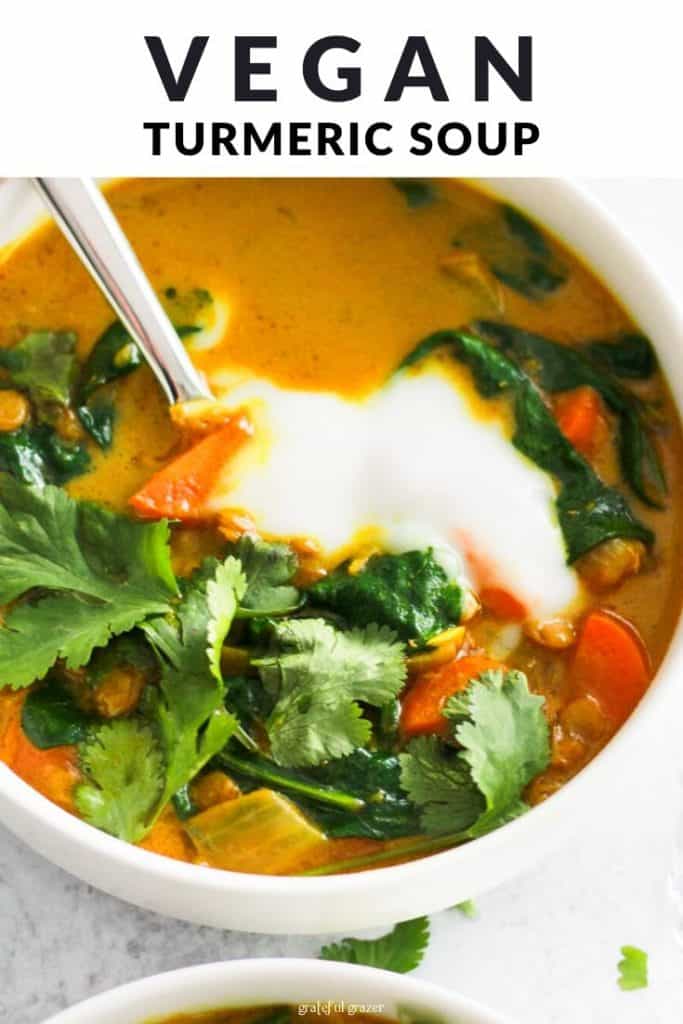 Make this nutrient-packed Vegan Turmeric Soup in one pot and store it in the freezer for up to six months.

Lately, I've been making almost entirely recipes with accessible ingredients that you can cook in an hour or less. Even better if the recipe is meal prep-friendly and only requires one pot.

I know I can't be the only one who's always looking for simple recipes, so this year, I'm focusing on sharing more easy vegan and vegetarian meals here on Grateful Grazer.

So, there's no better way to kick off the month than with a hearty, one-pot Vegan Turmeric Soup.

This recipe is freezer-friendly and has all of the color and flavor of coconut curry with the coziness of lentil soup.

How to Make Vegan Turmeric Soup

The best thing about this turmeric soup recipe is that you can prep the whole thing in one pot. Start by pouring your oil into a large stockpot. I like to use grapeseed oil because it has a high smoke point and stands up to heat, but any type works.

Once the oil is hot, stir in diced red onion and cook until translucent. Then add the carrots, garlic, and ginger, and cook until the mixture smells very aromatic. (Besides eating, this is the best part.)

Then, add the ground spices. Stir in the turmeric, cumin, coriander, cayenne pepper, salt, and pepper. The cayenne pepper is optional and adds a good amount of spicy flavor. Feel free to reduce the amount or omit it altogether for a milder flavor.

Next, stir in the lentils, vegetable broth, and coconut milk. Cover the pot, increase the heat to high, and bring the mixture to a boil.

Once the soup is boiling, reduce the heat to low-medium and cook for about 15 minutes, or until the lentils are tender.

Finally, stir in a big handful of spinach or kale and turn off the heat.

Once cooked, I like to divide the turmeric soup between bowls and top with fresh cilantro and plain dairy-free yogurt. Feel free to add other garnishes, such as Thai basil, green onions, bean sprouts, or sliced chile peppers.

An option for reducing food waste:

Root-to-stem cooking (or using the entire vegetable) is a smart way to reduce your food waste. Try it here with carrots by adding the green tops to the turmeric soup. Separate the carrot greens, chop them up, and add them to the pot when you stir in the spinach or kale at the end of the cooking process.

Can you make turmeric soup ahead of time?

This recipe is meal prep-friendly and a great option when you want to cook meals in advance. I think turmeric soup tastes even better the next day since the flavors have more time to develop and mingle with each other.

Store this soup in an airtight container and refrigerate up to 1 week or freeze for up to 6 months.

Use the carrot tops if desired to reduce food waste. Add them when you stir in the spinach or kale.
Tried this recipe? Tag me on Instagram!Mention @GratefulGrazer or tag #gratefulgrazer.

Try one of these plant-based soups.