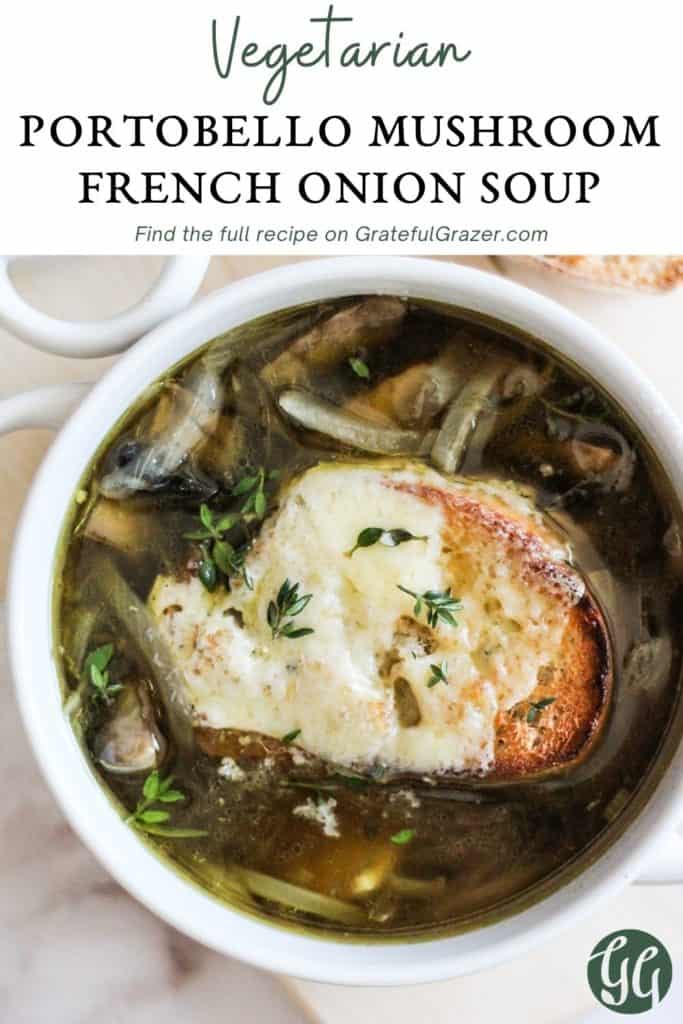 This vegetarian French Onion Soup is made with chunky portobello mushrooms for meaty flavor and texture in a vegetable-based broth.

There's really no such thing as "soup season" in my world. Soup is the most comforting and satisfying meal. It's a good choice at any time of year.

I will say, though, warm crocks of French Onion Soup with melty cheese are especially delicious when you're in need of a warm-up. With year-round produce like onions and mushrooms, this is also something you can easily find the ingredients for no matter the season, even if it's the middle of winter.

For equipment, remember you'll also need oven-safe soup crocks if you want to melt the cheese on top of the soup under the broiler. (If you're not able to buy them in time, I'll explain how you can make French Onion Soup with regular bowls later on, too!)

The first step for making vegetarian French Onion Soup is to sauté the onions. You can make the soup in a large stockpot or a Dutch oven. First, preheat the pot over medium heat, and then add the oil. Stir in the sliced onions and cook them for about ten minutes, stirring occasionally, or until they're soft and beginning to turn golden brown.

Once the onions are cooked, stir in the sliced shallot and chopped portobello mushrooms, and cook for about five minutes, or until the mushrooms turn dark brown.

Now it's time to add the liquids. Pour in vegetable broth (or mushroom broth) and water. Stir in a few sprigs of fresh rosemary for flavor. Then, cover the pot and bring the liquid to a boil. Once boiling, reduce the heat to low and simmer for ten minutes, or until the onions are fully cooked and the flavors all meld together.

Do you love French Onion Soup with melted cheese on top? Me too, it's the best. This is a quick and easy way to do it.

Preheat your oven broiler and spread sliced bread (I like to use a baguette) on a rimmed baking sheet. Transfer the baking sheet to the oven and toast under the broiler for a couple of minutes on each side. Remove the toasted bread from the oven and set aside.

Next, arrange oven-safe soup crocks on the baking sheet. Divide the cooked French Onion Soup between the crocks. Place a piece of toasted baguette and a slice of cheese on top of each bowl of soup.

Carefully return the baking sheet with the soup crocks to the oven and broil two minutes, or until the cheese is melted. Remove soups from the oven and garnish with fresh thyme leaves if desired.

Note that the soup crocks will be very hot when they come out of the oven. Serve the soup on plates or wait a few minutes before serving so they can cool down a little bit.

Can you make this recipe ahead of time? How do you store it?

If you want to make this vegetarian French Onion Soup ahead of time, I recommend cooking the soup up until the point that you toast the bread.

Store the cooked French Onion Soup in an airtight container and refrigerate it for up to four days (You can also freeze the soup for up to three months.)

Once you're ready, divide the soup into crocks and toast the bread and melt the cheese immediately before serving.

Some cheeses, including Gruyere, can be made with rennet, an enzyme from calves, which means it's technically not vegetarian. Some brands (such as Boar’s Head) make vegetarian Gruyere cheese without animal-derived rennet.

If you're not able to find suitable Gruyere cheese, you can substitute swiss, provolone, or mozzarella cheese instead. (Dairy-free cheese alternatives work great, too!)

Can you make this recipe without oven-safe soup crocks?

If you don't have oven-safe soup crocks, you can make this recipe with one simple change to the instructions. Cook the soup like normal and divide it between bowls. Top each with a piece of toasted bread and the sliced cheese. Working in batches, microwave each soup crock for 20 seconds, or until the cheese is melted. 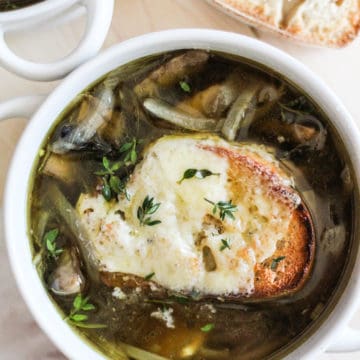 Store leftover soup in an airtight container and refrigerate up to 4 days or freeze up to 3 months. Toast bread and melt cheese immediately before serving.   Gruyere cheese can be made with animal rennet but some brands (such as Boar’s Head) make vegetarian versions. If you can’t find suitable Gruyere cheese, substitute swiss, provolone, or mozzarella.   Vegan/dairy-free variation: Omit cheese or substitute dairy-free cheese slices.   Gluten-free variation: Omit bread or substitute sliced gluten-free bread.   If you don't have oven-safe soup crocks, melt the cheese on top of the soup in the microwave for about 20 seconds instead of broiling.
Tried this recipe? Tag me on Instagram!Mention @GratefulGrazer or tag #gratefulgrazer.

If you tried this recipe, please leave a star-rating on the recipe card above. Your feedback is appreciated!

Subscribe to Grateful Grazer to get plant-based meal ideas delivered to your inbox weekly.