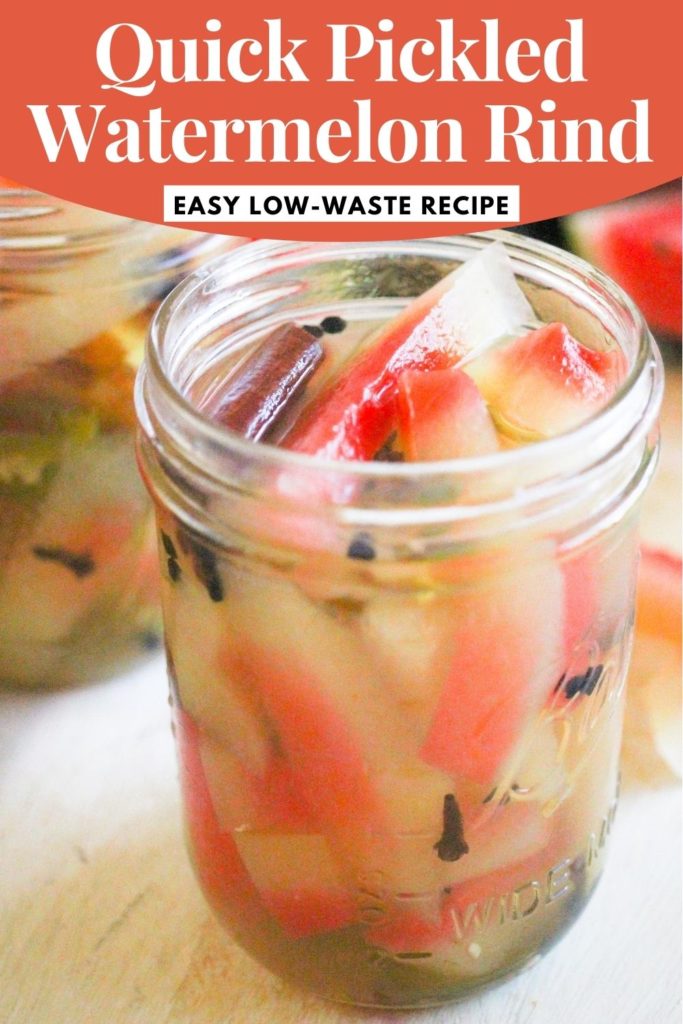 If you're looking for more ways to reduce food waste, try this easy recipe for Pickled Watermelon Rind! This Southern-inspired snack is sweet, crunchy, and ideal for making ahead.

I've tried my hand at lots of pickled veggies (radishes, onions, carrots, peppers, and classic cucumbers) but only recently discovered you can eat pickled watermelon rinds, too!

Watermelon rind pickles may be new to me, but folks have been making them for centuries. This type of pickled watermelon rind is popular in the Southern region of the US, where reports of the pickles date back to the 1800s.

Pickled watermelon rind has roots within African American culture, specifically. According to the website, Garden & Gun, the recipe was included in What Mrs. Fisher Knows about Old Southern Cooking, one of the first known African American cookbooks, which was published in 1881.

I've been learning more about traditional American recipes (in addition to other food cultures) lately, and I've always felt intrigued by dishes that make use of some of the lesser appreciated parts of fruits and vegetables (it makes things a little more interesting and also helps reduce food waste), so trying out these watermelon rind pickles was a no-brainer!

What is Watermelon Rind?

Watermelon rind is the firm, white part of the fruit. It's typically what's left over after you eat the pink flesh.

How to Make Pickled Watermelon Rind

To prepare the watermelon rinds for pickling, first slice off the green skin (this can go in your compost), and then chop the white parts into pieces. I decided to leave a little bit of the pink flesh on my rinds for some extra color and flavor. Feel free to shave off that part, too, if you prefer.

Traditionally, pickled watermelon rind is made by boiling the rinds in a salty brine with spices such as cinnamon and cloves. I also saw some recipes using ginger or peppercorns, so I tossed those in, too. I also used a mix of white vinegar and rice vinegar since I like the flavor.

To make the pickling liquid, stir vinegar, water, and sugar in a large saucepan over medium heat. Keep stirring until the sugar is completely dissolved.

Then, stir in the ginger, cinnamon, salt, peppercorns, and cloves and bring the mixture to a boil. Add the watermelon rinds and cook until they're softened (about five minutes).

Once the watermelon rinds are cooked, remove the pot from the heat and allow the mixture too cool for about a half-hour.

In the meantime, you can prep the jars by dividing the jalapeño slices between them. (I used two 16-ounce mason jars for this.)

Once the watermelon rinds are cooled, divide them between the jars and fill the jars up with the remaining pickling liquid.

How Long Can You Keep Pickled Watermelon Rind in the Fridge?

You can store pickled watermelon rind in the fridge for up to two weeks, so it's ideal for making in advance. I recommend waiting at least 24 hours before you open up the jars to eat. This allows some time for all of the flavors to mesh together.

I've been eating these watermelon rind pickles as a snack right out of the jar, and from other posts online, that seems to be the most common way to consume them.

I did also come across an idea for using them in salads and also on top of ice cream, which is definitely intriguing to me. (I'd love to hear about other creative uses in the comments!) 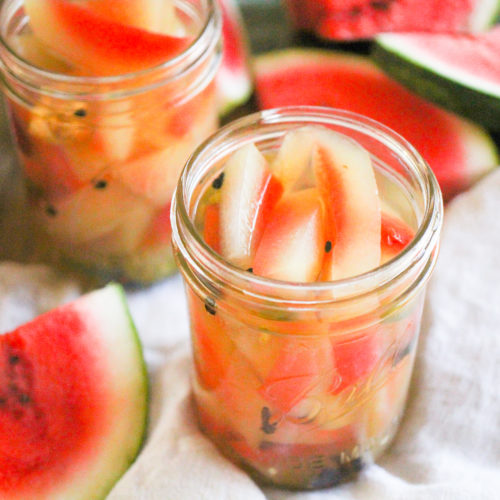 Substitute additional white vinegar for the rice vinegar if desired.    Pickling salt is an additive-free salt made with fine granules that dissolve easily in brine. Substitute kosher salt if desired.
Tried this recipe? Tag me on Instagram!Mention @GratefulGrazer or tag #gratefulgrazer.

Did you try this Recipe?